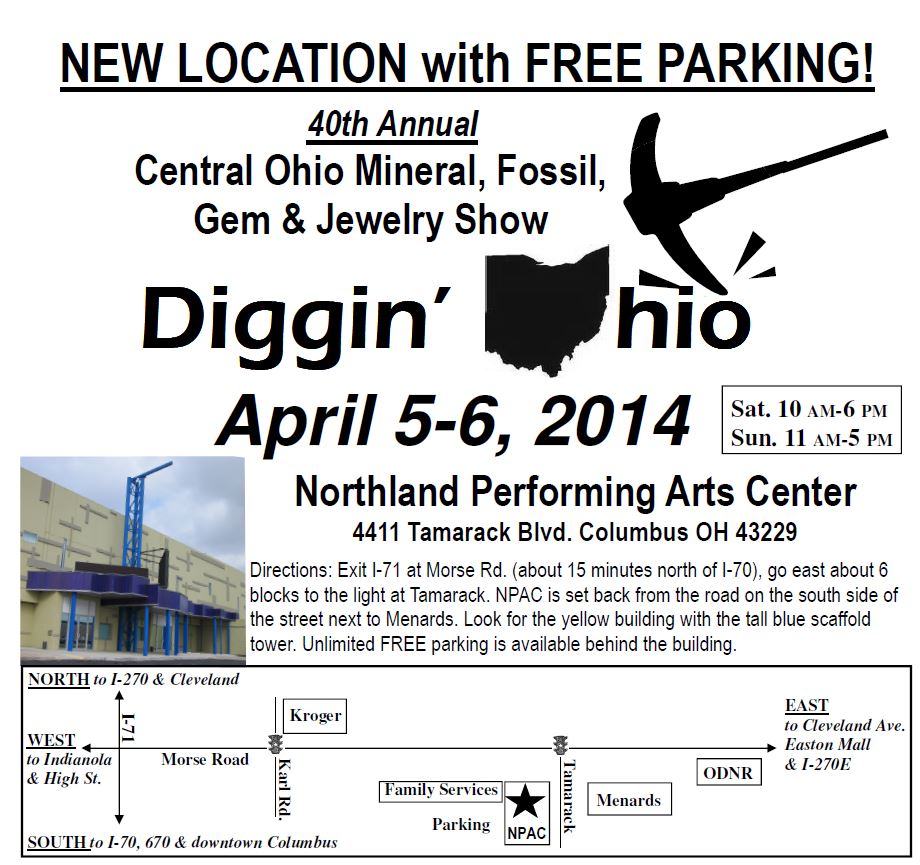 We're happy to announce this year's line-up of Guest Speakers:

On Saturday it will be:
1:00 PM - Jack Kallmeyer, serious fossil collector & president of the Dry Dredgers for 25 years
“The Classic Cincinnatian, Fossils from Abundantly Common to Fascinating Rarities”

The area around Cincinnati, Ohio, is one of the world’s richest for fossil collecting. The
rocks there were deposited late in the Ordovician Period, some 220 million years before the
first dinosaurs, and include brachiopods, bryozoans, corals, clams, crinoids, cephalopods,
snails, trilobites, and more. Mr. Kallmeyer will discuss the wide range of these fossils, and
explore both the common and unusual specimens.

3:00 PM - James St. John (School of Earth Sciences, Ohio State University at Newark)
"Ohio Minerals"
Many dozens of different minerals can be found in Ohio – about four dozen of them occur
in Ohio's bedrock. This talk will highlight the best known and glamorous crystal forms of
Ohio's minerals, including celestite, fluorite, calcite, pyrite, sphalerite, and quartz.
Sunday's speaker will be:

This talk looks at the effects (erosional and depositional) glaciers have on the landscape,
discusses theories for the causes of glaciation, reviews the animals that lived in Ohio during
the Ice Age, and ends with a look at a dig near Findlay, Ohio, that produced many fossil
bones.

Come visit our Silent Auction area!  Lots of Great Deals!
Here's a sneak peak at some of this year's items: